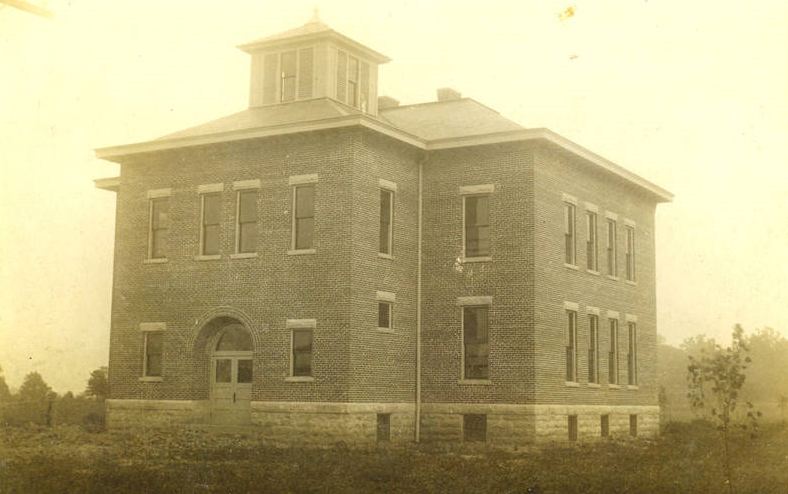 Having attended a rural school for the first eight years of my formal education and then teaching in rural schools for eleven years, gives me license, I think, to expound upon their characteristics – good, bad or otherwise. I must admit, though, that i n the interests of a good story, the information contained in this paper is about the rural school of my childhood. By the time I was teaching, some aspects of the rural school had changed, although the main characteristics remained the same.

“What is a rural school?” you ask. A rural school contains a plot of ground, the buildings, (of which more will be said later) as well as the school district and the people within its boundaries. A map of the said boundaries of many school districts c ontained the epitome of gerrymandering. No one really knew why these boundaries were so irregular. Perhaps it was because of the density population or lack of it, or of the distances to walk, or of some families’ preferences or of some other reason, but o nce there, those boundaries pretty much stayed that way. Some districts were entirely within one township, others spilled over into two or more townships and were known as fractional districts. In those days people lived quite distant from each other, but families were large, so there was usually a large school enrollment. It was not uncommon to have four or five members of a family in the same school. I personally remember attending school with seven members of the same family.

A three-man Board governed the district and I mean “man”. Never, in those days was there a woman Board member. The Board consisted of a Director, a Moderator and a Treasurer. The only qualifications were to be a man and to be respected by your neighbor s in the district. Many a rural school board member did not have an eighth grade education, yet the whole business of running the school was in the hands of this Board and the “schoolmarm” was directly responsible to these men. Except for the one big annu al district meeting, the three men conducted all business relative to the school.

The school building was usually set upon quite a large plot of ground. (Land was cheap and some community-minded farmer would be glad to donate a corner of his farm especially if it were likely the school would bear his name and besides this, it usuall y meant that his own children would not have to walk far to the “seat of learning”. Sometimes, this also meant that the “Schoolmarm” boarded at his home which also enhanced his standing in the community.) As a general rule, the only buildings on this plo t of land were the schoolhouse with woodshed attached and two little outbuildings in back. At that time, they were not labeled “His and Hers” or any other such designations, but believe me we knew which was which. Two-seaters were the rule of the day, but occasionally a third hole at a lower level was added to accommodate the little folks.

The school building was usually a rectangular structure with a shed attached to the back. In one end of the building was a cloakroom sometimes a separate room, but more often a part of the big room. The roof was always peaked with the chim ney at one end and the belfry at the other. Inside the big room, in the center or in one corner was a big pot-bellied stove. Students near the stove toasted while those on the outer edge needed an extra pair of “long-johns”. The teacher’s desk was up front. Directly in front of her desk was a long recitation bench. Behind this, packed in like sardines and solidly nailed to the floor were rows of double seats for the pupils. Not much attention was given to putting a child in a desk to fit his size. In fact , in the interests of discipline and help to the teacher, many a tiny boy or girl was seated with big sister or brother. Six or eight tall narrow windows the only light, as electricity was then unknown in rural areas. Tucked in somewhere around the room w ere homemade shelves for the few library books and for the water bucket and wash basin. It was a real sign of progress when the water bucket and dipper were replaced with a so-called fountain the kind where a huge glass jar was inverted onto a standard an d the wastewater ran into a pail under it. Many a time did the teacher turn around during an arithmetic class just in time to see a stream of water from the overflowing pail, streaking toward her high-top shoes. Hands were all washed in a tin basin and wi ped on the same cloth towel. Wainscotting of a dark color, so not to show many dirty handprints, came up about four feet from the floor with a lighter-colored painted wall above it. George Washington, Abraham Lincoln, Benjamin Franklin or other early patr iots looked sternly over the pupils from their pictures on these walls. Lucky were those students whose school’s walls also held a Rosa Bonheur or still life painting. Every self-respecting patriotic school also had an American flag displayed on one wall as well as one flying from a flagpole out of-doors. Somewhere near this flagpole was the deep well that provided a cooling draft of water after a hard game of baseball during recess, as well as to meet the needs inside the building.

The teacher was almost always a single lady and had to be a “paragon of virtue”. She also had to be a tireless worker with the “patience of Job”. First of all, because of the transportation of the time, it was necessary that she board in the district. It was not always easy to find a place and when one was found, it usually left “something to be desired”. Sometimes, it was with one of those big families and she would have to share a room with one of the younger girls. There was no privacy, so teacher s tayed at the schoolhouse as long as daylight would permit. However, with all her duties, there was always work to be done there. Her typical day went something akin to this: She arose early, dressed for school, ate breakfast, packed her own lunch and walk ed to school whatever the distance. Upon arriving, she carried wood and kindling from the woodshed and built the fire. As the building was warming, she carried in the day’s water for drinking and washing hands. The room was tidied, lessons for the day wer e reviewed, plans were made and questions, plans and instructions were written on the blackboard. Time was always too short, as pupils soon began to arrive with things to share, questions to be answered, quarrels to be settled, etc. etc. From 9:00 A.M. un til school was dismissed at 4:00 P.M., not one moment could she call her own. During the day, she “wore the hats” of superintendent, principal, counselor, teacher, coach, nurse, janitor, referee, baby-sitter and others. Decisions to be made were her own – there was no one to help or advise and no telephone to call for help should she need it. Even during recesses and the noon hour, she was on playground duty. When 4:00 P.M. came and the last child had left, she drew a sigh of relief, picked up the broom, did the sweeping, checked the buildings and grounds, began her planning for the next day’s lessons and on and on. Finally, as the sun was getting low in the sky, she trudged her weary way toward her boarding home, loaded down with a big pile of papers to correct. Yes, it took a special kind of person to be a teacher in a one-room rural school. And if she were that special person, she received her reward in the satisfaction and joy of her work. Her pupils lobed and respected her – they wanted to help her and to share with her. “An apple for the teacher” was no trite expression. There were apples for the teacher and many other goodies as well. Until a monitor schedule could be set up, the pupils vied with each other over who would clean the erasers, wash th e blackboard, raise the flag, ring the bell, etc. Students wanted to learn for her and learn they did in spite of many adverse conditions. Parents, in general, were behind her in her efforts and gave cooperation. Most of them were advocates of the old say ing, “If you get a licking at school, you will get another one when you get home”. Therefore, seldom was such a punishment needed. Parents taught respect and honor for the teacher. Many a young female student was inspired by her “schoolmarm” to become a teacher in later years.